Cross-Training then and now: Olympic Training Log May 21-May 27

Posted on May 21, 2012 by nancytinarirunswrites

If you’re following my 1988 training log, you’ll see that this was another week of NO running. My situation now, in 2012, is similar in that I can do very little running because of advanced arthritis in one knee. Though my orthopedic surgeon advised me not to run at all after my second knee operation in January 2011, I’ve found that I can run 5K on a soft surface once or twice a week without aggravating my knee. Sometimes it acts up and I stop running completely until it feels better. Self-control is essential—and for someone who needs to be active, so is cross-training.

I wrote about the pros and cons of various types of cross-training a couple of weeks ago. That article was a general guide. This week, I’ll write about what works for me personally, and how that has changed between 1988 and now.

What has stayed the same:

My cross-training regime when I’m able to do little or no running has always included a lot of cycling, both outdoors on a real bike, and indoors on a stationary bike. Cycling uses different muscles than running, but it has the advantage of using primarily the leg muscles, as running does, and it can be a very tough cardiovascular exercise, ideal for maintaining fitness.

The Schwinn Airdyne. I haven’t done a workout on this for years–thank goodness!

As a 10,000m runner, I needed to do a lot of stationary bike workouts in 1988 to try to replicate the intensity of the track workouts I would do to prepare for a race. That meant doing “intervals” on the Lifecycle bike, where I increased the resistance or “hills” to the point where I was pushing all-out for periods of between one and three minutes. I hated those workouts. Typically, I would spend between 40 minutes and a hour on the Lifecycle to mimic a running workout that included a warmup, some steady work and some intense interval training. I also used another kind of indoor bike, the Schwinn Airdyne, which uses both arms and legs and creates increased resistance the faster you pedal. That bike caused intense suffering, but at least it had a cooling fan.

The boredom of indoor bikes could only be relieved by a good soundtrack and watching the numbers on the bike’s control panel. It’s not nearly the same as being out in the fresh air on the track, going through a workout with teammates and watching the rest of the action on the track. I found that doing a hard workout on the bike resulted in a disgusting amount of sweating and a sick, rather than exhilarated, feeling of exhaustion afterward.

In 1988, I did a fair amount of outdoor cycling, too. That was for my sanity. It was so I could be outside and enjoy at least some of my exercise time. But I had to recognize that outdoor rides weren’t intense enough to be a good substitute for running, except on uphill sections. My coach George and I had one route that was a flat 40k in the Ontario farmland north of Toronto. Each time we did it, we tried to break our record—I think we got it down to about 56 minutes on our racing bikes. Typically, George would draft me most of the way and then blow by me in the final kilometre.

Other staples of my cross-training program, as my readers will know, were weight training and swimming. I focused more on leg exercises when I wasn’t running; I found that doing leg weights took too much out my legs to do an optimal running workout the following day.

I typically covered 1,600m to 2,000m in my swim workouts, usually a mixture of steady swimming and short sprints of 50m to 200m. Again, I wanted to replicate the intensity of interval training.

I did no water-running, because I found it unbearably boring. That hasn’t changed.

The main changes in my cross-training now have to do with my motivation. I no longer need to maintain the fitness required to run a world-class 10,000m. Now, I want to exercise hard enough to get a bit of a buzz, stay fit, and enjoy my workouts.

That means I’m no longer willing to suffer the boredom of long gym cardio workouts. Also, I’ve discovered machines that are closer to running than stationary bikes are. For a while I used an elliptical trainer; now I use a similar machine called the Arc trainer. I love the flexibility of the Arc; it allows you to be very creative with your workouts by adjusting the step height, the resistance and your “running” speed. I have found the combination of resistance and speed that makes me push my heart the hardest. Now my philosophy is “go all-out for 20 minutes and then move on to something that’s more fun.” Since I know I can only race the occasional 5K, and never farther, why should I bother spending lots of time doing extended cardio workouts?

The only reason is if I’m having fun. Now, my only long workouts are those done on my mountain bike. I never ride a road bike anymore; I like the way my mountain bike can go anywhere, and often my workouts cover a variety of terrain from roads to paved paths to gravel paths to rough mountain biking trails. Vancouver has many scenic places to ride. I love being outdoors on a beautiful day, and if I can’t run then cycling is a close second choice; there are moments when the speed and adrenaline rushes of cycling make it even better than running.

Another change in my exercise routine now is that I started doing Pilates about four years ago. It’s nice to be improving in something at my age; I’m now far more flexible than I’ve ever been in my life. Pilates showed me that my back muscles were very weak, and I’ve improved my core strength a lot.

I’m still enjoying most of my workouts after 30 years of making cross-training part of my program.

1. Decide what works for you. Be open to trying new things, but be honest about your preferences.

2. Incorporate lots of variety in your program. With a good gym and several different exercise options, your possibilities are endless!

3. Create new cross-training challenges and goals for yourself. Some examples of my goals for this year: 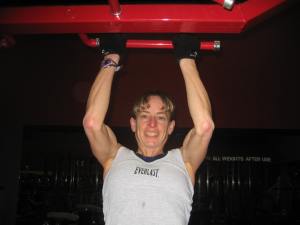 And if all else fails…grin and bear it!

AM: Did 30 min hard continuous on stationary bike. Did hamstring curls, 5 min more on bike, more curls. Went to pool, swam about 1700m ˜ 35:00, had to stop because pool so crowded I couldn’t pass.

PM: Weights with George. Did a push-strength workout but different than usual—did about 1 easy set, 4 hard sets of each exercise, then moved on to next exercise—rested between sets while partner did exercise. Almost 1 hr—not too hard overall, but arms exhausted.

PM: Did pull-strength-endurance workout plus situps—had to give legs a rest. Worked very hard 62 min.

I used to be known as a competitive runner, but now I have a new life as a professional writer and editor. I'm even more obsessive about reading, writing, and editing than I was about running. Running has had a huge influence on my life, though, and runner's high does fuel creativity. Maybe that's why this blog evolved into being 95% about running, but through blogging I'm also learning about writing and online communication. I'm fascinated by how the Internet has changed work, learning, and relationships. I love to connect in new and random ways!
View all posts by nancytinarirunswrites →
This entry was posted in Olympic Training Log, Training Tips and tagged Airdyne, cross-training, cycling, stationary bike, swimming, weight training. Bookmark the permalink.