The Olympic Village in Seoul–Part 2

Posted on September 20, 2012 by nancytinarirunswrites

Daily life in the Athletes’ Village 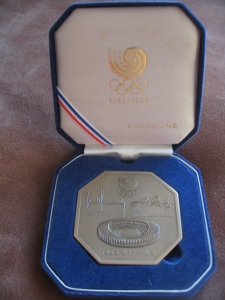 Another medal given to all 1988 Olympians.

We were treated very well in the Athletes’ Village. It was truly a self-contained town that you didn’t have to leave for anything. Here you could eat, sleep, train, and get news, entertainment, and access to (primitive) computers. We all wore identity cards around our necks, and we were scanned each time we entered the Village. This card allowed us to use all of Seoul’s public transportation (including the newly-expanded subway) for free.

Housing and food in the Village

We lived in “houses” that had a common living/dining/kitchen area plus five bedrooms (four doubles and one single). I was rooming with Mary Burzminski, an 800m runner I hadn’t met before. All the other women in my house were sprinters; I knew most of them slightly. 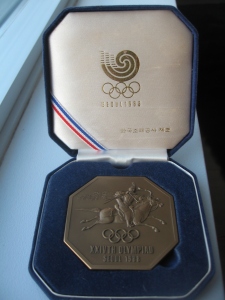 The reverse side of the same medal.

The dining room was open 24 hours a day. At each of the several entrances there was always a beautiful, traditionally-dressed young woman who greeted us in a soft, sing-song voice. Our choices in the dining room included all kinds of international and Korean foods. I didn’t like the spiciness of the latter so stuck mainly with a typical North American diet.

There were also freezers and vending machines located throughout the Village where we could get ice cream, drinks, and other goodies at any time. Everything was free. It was difficult not to overeat! Diet Coke continued to be my drink of choice, as it had been throughout that hot summer. The late-September weather in Seoul was pleasant; much like the Indian summer we often get in Vancouver in early September; warm but not too hot.

My training in the Village

There was a good training track in the Village. I only used it for a handful of workouts. My heel and Achilles injuries were still bothering me, and it was now time to peak, not to do long or difficult workouts.

The only soft surface I could find to run on was the grassy pentathlon cross country course. It wasn’t being used most of the time and I was allowed to train there.

I did my cross-training at a well-equipped gym and swimming pool within the Village. Both places were usually almost empty; I never saw other Canadian runners there when I was training early in the morning.

Entertainment and communication in the Village

We could watch movies and TV within the Village. There was always live coverage of the Olympics, of course. We could also get near-instantaneous complete results on computers.

The Village had its own newspaper, which was published every day. How I wish I had kept a few copies of those now!

It seems hard to imagine, but in 1988 there was no social media, no Internet, not even email. There were no cellphones, and certainly no smartphones! People received telegrams from home, or even snail-mail letters. Phone calls were expensive. I don’t recall making any phone calls to Paul or George while I was in Seoul. George was back in Toronto, and Paul was in Brussels starting the final year of his Ph.D.

I was a bit of a loner during this Olympic trip. I would have liked to have had the security and relaxation of being part of a group of close friends, but it didn’t work out that way. Partly this was due to circumstances, but also, it’s also part of my nature to be somewhat introverted; I’m certainly comfortable doing things on my own.

For a large team, the 1988 Canadian track and field team was a very cohesive one in which all the different groups of athletes—sprinters, distance runners, walkers, throwers, jumpers, and multi-sport athletes—respected and encouraged each other. (That is, until the Ben Johnson blow-up—but that will be the subject of another post.)

However, I didn’t experience the same sense of closeness and camaraderie that I’d always felt as a member of Canada’s teams at the World Cross Country Championships. The small size of those teams, and the fact that we were all distance runners doing the same event, made it easy for us to become good friends.

Two things separated me from the other distance runners on the Olympic team. First, as mentioned above, I wasn’t rooming with any of them. Secondly, I couldn’t share training routines with either my roommate Mary or any of the distance runners. My serious injuries prevented me from doing the casual “easy” runs that all the other middle- and long-distance runners did, usually sometime in the late morning. They did their hard workouts on the track in the evenings. In contrast, I’ve always been a very early riser. I preferred to do my workouts early in the morning, and I was more likely to be at the gym or the swimming pool than the track.

I wasn’t alone all the time, of course. There were always teammates to talk to at the stadium and in the dining room. For two brief weeks, I was immersed in this temporary, insulated world with its supercharged atmosphere of youthful energy, talent, egotism, and tension.

Coming up next week: My 10,000m semifinal and…Ben Johnson’s failed drug test, and the effect it had on the Canadian team. 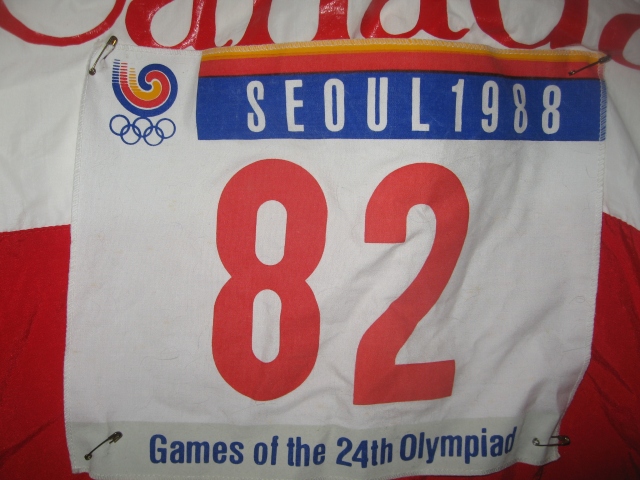 My Olympic track jacket with its cloth number is still in good shape.

I used to be known as a competitive runner, but now I have a new life as a professional writer and editor. I'm even more obsessive about reading, writing, and editing than I was about running. Running has had a huge influence on my life, though, and runner's high does fuel creativity. Maybe that's why this blog evolved into being 95% about running, but through blogging I'm also learning about writing and online communication. I'm fascinated by how the Internet has changed work, learning, and relationships. I love to connect in new and random ways!
View all posts by nancytinarirunswrites →
This entry was posted in Olympic Training Log, Personal stories, Running and tagged 1988 Olympic Village, 1988 Olympics, Athletes' Olympic Village. Bookmark the permalink.

2 Responses to The Olympic Village in Seoul–Part 2