When We Were Fast: 23-minute tempo runs with Dave Reed

Posted on February 28, 2013 by nancytinarirunswrites

Dave Reed at the Ambleside Mile in 2008. He placed second to Warren McCulloch in a time of 4:36. Photo by Mynor Campos.

Since the Vancouver Falcons club (VFAC) is putting on their annual Dave Reed Classic 5K race this Saturday, I decided to write about Dave, one of my oldest running friends. Dave, a member of both VFAC and the Phoenix Running Club, died in 2008, too young at 54, after contracting a deadly infection.

I met Dave in Toronto in about 1977, when we both became members of the fledgling York University Track Club led by George Gluppe. In a few years our club had joined up with the giant Phoenix Track Club, and our young endurance group included many national and international-class runners. We got together for big track workouts and distance runs three or four times a week. Dave and I often did tempo runs together as well, since he lived only a few kilometers away from my parents’ house.

Dave was an instrumental training partner who helped me make the leap from running 34-something for 10K in 1982 to 32:18 in 1983. He was much faster than me, but we were well-matched over the 10K distance. He didn’t like running hard for longer than 5K, and the 10K played havoc with his mind. In fact, he never beat me in a 10K race in those days. Invariably, I would pass him somewhere in the fifth mile, when his grit deserted him (he described this as “hearing the pitter-patter of little feet”), and I’d get too far ahead for him to catch me, even with one of his spectacular sprint finishes.

My tempo runs were a regular part of my training schedule. I did them every Tuesday and Thursday morning; later, on the same days, I would do track workouts with the group at York University. The tempo runs were done at very close to an all-out effort; I tried to run faster each time. Dave and I had two routes. One was around four miles; our record for this course was 22-something. The other course was longer, about 5 miles, and included some giant hills. Both courses were run mostly on grass and well-trodden dirt paths.

Between 1982 and 1984, when Dave and I did these tempo runs regularly, I was a student and then a lab technician at York University. I had a long bus and subway commute to get there every morning. That meant that our runs had to start at 6:45 or 6:55 (depending on which course we were doing). Dave knew that if he wasn’t at the door by the agreed-upon time, I’d leave without him.

A typical summer morning’s run is very clear in my mind.

Almost immediately after getting up, I’m dressed and ready to run. I don’t need any coffee to get me going, and I can’t eat anything before running hard. At the last minute, Dave rides up on his bike. After about five seconds of small-talk, we’ve started our run. No warmup for me: Dave’s had his vigorous bike ride. My parents’ cul-de-sac leads right to the chain of small grassy parks, schoolyards, ravine paths, and the golf course that make up our route. We only have to cross one road. I don’t recall ever stopping to wait for cars—we must have been fast!

Dave helps me push the pace, often surging in front of me when I start to flag. In my mind, I see him leading me up a steep hill near the end of our run. It’s already a hot summer morning, and we’re both covered with a slippery layer of sweat. Dave is shirtless. His generous mop of red curly hair must make him hotter. The low morning sun lights up all his body hair, producing a brilliant halo around his running form.

My eyes are peeled on my watch as we sprint to the end of the driveway, our finish line, trying for another PB day. 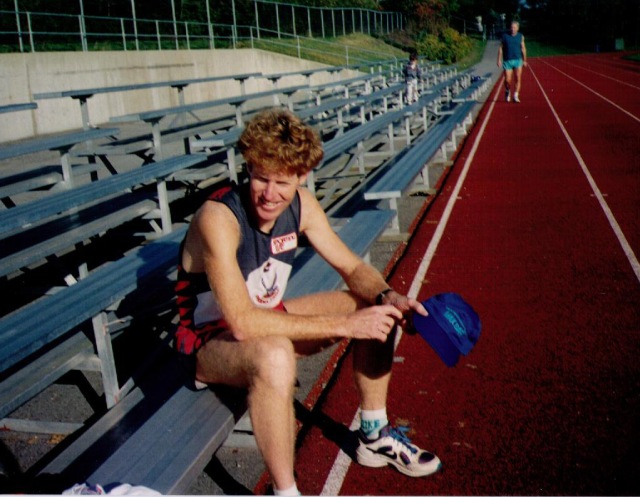 Dave at Centennial Track in Coquitlam, 1995. George is in the background. Dave moved West five years after we did. He had an impressive masters career. He retained his youthful speed as well as his boyish looks.

I used to be known as a competitive runner, but now I have a new life as a professional writer and editor. I'm even more obsessive about reading, writing, and editing than I was about running. Running has had a huge influence on my life, though, and runner's high does fuel creativity. Maybe that's why this blog evolved into being 95% about running, but through blogging I'm also learning about writing and online communication. I'm fascinated by how the Internet has changed work, learning, and relationships. I love to connect in new and random ways!
View all posts by nancytinarirunswrites →
This entry was posted in Personal stories, Racing, Running, Training Tips and tagged Dave Reed, Dave Reed Classic 5K, Phoenix Running Club, tempo runs, Vancouver Falcons, VFAC. Bookmark the permalink.

4 Responses to When We Were Fast: 23-minute tempo runs with Dave Reed