Posted on March 31, 2014 by nancytinarirunswrites

Yesterday evening I had a near-mystical experience of closeness—the kind of closeness you can have when you are alone, yet deeply connected in some way to others. I was listening to Eleanor Wachtel’s “Writers & Company” on CBC’s radio one. Wachtel was interviewing Scottish writer Jackie Kay.

It is rare for me to let myself stop everything to lie on my couch, close my eyes, and devote myself completely to listening. As I did so, a deep peace came over me. Kay’s voice was lovely with its accent and soft tones.

I learned about a few things—the author’s adoption as a sickly baby, her growing up with her adoptive parents in Glasgow, her experiences being bullied as a kid with dark skin (her biological father is Nigerian) in a country of pale-faced people, her disturbing meetings with her biological parents.

But an interview of this depth is about more than learning facts. It evokes the wonder of being let into someone else’s life, someone else’s imagination. Kay was not speaking to me personally, but she was sharing herself, fully and honestly. And even though I’m just one anonymous listener, I feel the kinship of being a fellow writer (on a humble level), of the comfort that writing brings, the compulsion to do it, to share, the way writing explains not only to others but to oneself.

Receiving this gift of the window into someone else’s mind and soul—even when it’s just one articulate person speaking—I feel my world expanding. I think of the multitude of voices that speak, that write, that teach me, broaden me, open me. Yes, I can’t help repeating, “This is a gift. I am so thankful. I am so thankful for this hour with Eleanor Wachtel and Jackie Kay.”

One level of being thankful is for the writer’s ideas and stories. They make me a richer person.

On another level is the sheer sensory pleasure of listening to Kay’s voice. At times, I could let myself drift and listen to that voice simply as a musical texture divorced from the meaning of the words, a caress that soothed and relaxed me. Wachtel’s rich, intelligent voice, interjecting with a brief question or comment every now and then, was a perfect counterpoint to the musicality of Kay’s accented words.

One part of Kay’s story in particular sticks in my mind. She and Wachtel talked about how Kay’s books are often about identity; this is understandable considering that Kay was adopted at birth. The amazing thing about her adoption is that she was born brain-damaged, and her adoptive mother was strongly advised to choose another baby. Yet the mother insisted on taking the baby she had planned to make her own from before the time she was born. What mysterious force can make an adoptive mother love a sick baby, unconditionally, before that baby can even be known as a person? How can this happen without the compelling strength of biological instinct?

I don’t know the answer to these questions; I can’t imagine myself being capable of such a love; but the woman who became Kay’s mother made this choice. She has been richly rewarded by the closeness she still shares with this wonderful, talented woman, who says that her adoptive mother and father made her what she is.

Kay’s adoption story is just one example of the inexplicable love and goodness that some people radiate. Hearing Kay talk about her life, and hearing her read some nuggets from her poetry and stories, made me think about the love that is everywhere and the way love grows as it is shared.

I was only one person out of perhaps thousands of listeners. Kay changed my life during that hour or so of listening. When she was finished, the setting sun was flooding my apartment, turning it golden, and I was enveloped in peacefulness and gratitude.

You can listen to Eleanor Wachtel’s interview with Jackie Kay here. “Writers & Company” airs on CBC radio one Vancouver 88.1 FM 690 AM at 5:00 p.m. Sundays. 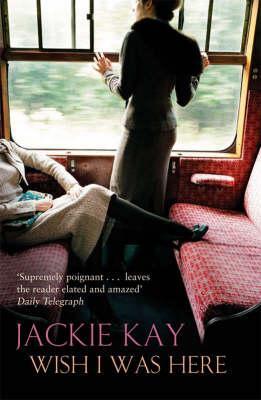 During her interview with Eleanor Wachtel, Kay reads her story “You Go When You Can No Longer Stay” from this collection.

I used to be known as a competitive runner, but now I have a new life as a professional writer and editor. I'm even more obsessive about reading, writing, and editing than I was about running. Running has had a huge influence on my life, though, and runner's high does fuel creativity. Maybe that's why this blog evolved into being 95% about running, but through blogging I'm also learning about writing and online communication. I'm fascinated by how the Internet has changed work, learning, and relationships. I love to connect in new and random ways!
View all posts by nancytinarirunswrites →
This entry was posted in Personal stories, Relationships, Vignettes, Writing Criticism and tagged Eleanor Wachtel, Eleanor Wachtel interviewing Jackie Kay, Eleanor Wachtel Writers & Company, identity and adoption, Jackie Kay, Wish I Was Here, Writers & Company. Bookmark the permalink.