Riding into the hail: another little cycling tale

Posted on April 18, 2016 by nancytinarirunswrites

Last Tuesday was my final day to spend time with my parents in Toronto. I was eager to get out for a bike ride before sitting for five hours on the flight back to Vancouver. Last year my brothers had forced my father to “retire” his 35-year-old Raleigh and accept the gift of a new bike. He had protested, but ended up being happy because the new bike made it possible for his 85-year-old legs to climb hills again!

Now I wanted to find out just how fast the new bike could go—and I would wear my Garmin to record.

At 6:30 in the morning, it looked like it would be a good day for riding.

The dawn that morning had been clear but cold. At noon, when I was ready to start my ride, the sun was bright but it was also windy with lots of clouds moving overhead.

I began my ride from my parents’ apartment building near Don Mills and Lawrence. Finding my way to the paths of Edwards Gardens and Sunnybrook Park without taking any main roads was a bit of an adventure. Going through a maze of residential and industrial streets,  I took “the long way” to Edwards Gardens, my progress slowed by an aggressive cold  wind from the north.

As I rode into Edwards Gardens, the sky looked ominous. It had clouded over completely. I was well-protected with several layers of clothing including a waterproof jacket, but I had forgotten to bring warm gloves and was wearing thin cycling gloves that left my fingers exposed.

Down in the paths of Edwards Gardens and Wilket Creek, I looked at the steep ravines rising sharply on either side of me. Toronto’s ravines, formed by branches of the large Don and Humber rivers that flow into Lake Ontario, are a characteristic feature of the city. They bring back  many memories. As a kid and a teenager, I always had hidden wooded places to play, wander, and tryst.

When I started running as a 16-year-old with my high school cross-country team, the narrow rutted trails along the Don River system were our main training grounds. “Our” trails were just part of the extensive running and cycling network that makes Toronto a green and wonderful place for runners—that is, for seven or eight months of the year. Now, the ravines looked naked, stark, all their secrets revealed by the skeleton trees. I could see the sheer eroded cliffs on the west side of the creek. I wanted to stop and take photos of those dramatic cliffs, but my hands were too cold. If I stopped riding, my whole body would freeze.

I continued south into Taylor Creek Park. I was flying on the bike, the wind pushing me. Suddenly, enclosed within that vast panorama of park and darkened sky, I was seized by the ecstasy of speed as the path unwound effortlessly before me.

Why have I been riding a mountain bike all these years? I have to get a road bike again—I love this lightness and speed!

But the sky looked evil; the wind was becoming stronger and colder. Hail began to fall, lightly at first. My fingers were frozen now. Reluctantly, I decided I had to turn back. I couldn’t get too far away from my parents’ apartment, not when I was inadequately dressed. At least I had my cellphone with me.

When I turned back north into the wind I became aware of its full force. Now I would get a workout! I kept my head down to reduce the stinging of the hail against my face. After a few minutes the hail turned into heavier driving snowflakes.

All I could think of was that I had to get home as quickly as possible because my fingers and toes were frozen and the rest of my body was barely warm enough. I would take the most direct route by riding north along Leslie Street, a busy and hilly main road. I exited Sunnybrook Park just north of Eglinton Ave. and began the perilous ride on the road, with cars whizzing by me. My light bike and light body were buffeted by the wind which seemed to come not only directly against me, from the north, but from the side as well, making me feel unstable. I was worried about losing control of my bike in the traffic, so I moved onto the sidewalk.

At one point, as I rode  downhill, I had to shift to an easier gear because the wind against me was so strong. But my legs were strong too. I was thankful for the many tough climbs I’d done recently back home, on hills that made Toronto’s undulations laughably small.

As I pushed against the relentless wind, I remembered riding along the same street as a teenager, before I became a runner. The hills had seemed so hard then, and a 20 km ride was an epic feat of endurance. Of course, I only had a basic 3-speed bike then, but still—I realized how  becoming a competitive runner has shaped my whole perspective since then. At 15,  I could never have imagined what my body was capable of doing, not only as a teenager but as a 56-year-old!

Luckily, I only had to ride a little over a kilometre on Leslie Street before I could escape to some small residential roads.

Then, suddenly, the storm was over! The sun came out. I recognized a long level bike path my dad had taken me riding on before. Finally I had a chance to test the speed of the bike! I was inhibited somewhat because there were other people using the bike path—walkers, joggers, and other cyclists. At one point I had to be especially careful because a class of  middle school students were doing timed sprints on the path. However, I was happy I was away from cars again, and could challenge myself freely. I would look at my Garmin splits later.

After zooming back-and-forth on the 2K bike path a couple of times, I headed back to my parents’ apartment, finding my way through the residential streets more confidently than I had at the start of my ride. Getting lost is the best way to get to know an area.

By the time I reached their building, the sun was positively benevolent! It was hard to believe this was the same world I had been riding in only 20 minutes earlier. Now, I didn’t want my ride to end. I crossed the road into another residential neighbourhood with its wide, curving, empty crescents and cul-de-sacs; a typical Don Mills neighbourhood where the streets followed the topography of the ravines and many homes backed onto the suburban semi-wilderness.

This was a good way to end my Toronto visit—cruising in the warm sunshine that had finally thawed my fingers and toes. My ride had reminded me of the early springs of my childhood, the Dr. Jekyll-and-Mr. Hyde nature of Toronto in March and April: Icy winds, snowstorms, but longer days…  The deceptive thaws and deliciously mild days when I could suddenly run in shorts…  The smells released by the melting snow—earthiness, but also the winter’s accumulation of dog deposits…  The delightful scents of flowers and freshly mown grass were still to come.

I rode back to my parents’ building and took the bike back up to their storage room. Exuberantly, I told my mom and dad about my adventure in the hailstorm. They hadn’t even been aware that the sunny day had changed for a while.

I had only an hour or two left to have lunch and chat with my parents. I hoped I could bring some of the day’s freshness, energy, and sunlight in to them. My mother has COPD and is always on oxygen. It has been a long time since she could ride a bike. My father will be riding again when the weather is consistently warm—no fighting against bitter wind and hail for him! And he is in line for knee replacement surgery—as I, too, will probably be some day. 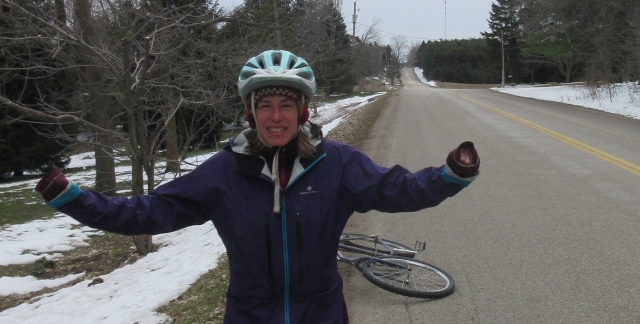 I’m sitting on my balcony as I reread this post that I almost finished writing last week. It was warm in Toronto today, but here in Vancouver it was HOT! I’ve abruptly moved into summer mode, when my favourite time of day is the post-sunset time on my balcony. I feel the gentle, cooling air on my body, listen to the building’s water fountain below me, and watch the changing colours in the sky.

Why do I write posts about my little bike rides, anyway? Well, that will be the subject of another post—coming soon, I hope.

I used to be known as a competitive runner, but now I have a new life as a professional writer and editor. I'm even more obsessive about reading, writing, and editing than I was about running. Running has had a huge influence on my life, though, and runner's high does fuel creativity. Maybe that's why this blog evolved into being 95% about running, but through blogging I'm also learning about writing and online communication. I'm fascinated by how the Internet has changed work, learning, and relationships. I love to connect in new and random ways!
View all posts by nancytinarirunswrites →
This entry was posted in Cycling, Seasons, Vignettes. Bookmark the permalink.

2 Responses to Riding into the hail: another little cycling tale