Finding my way out of writer’s block with photography: a photo journal

Posted on January 15, 2019 by nancytinarirunswrites 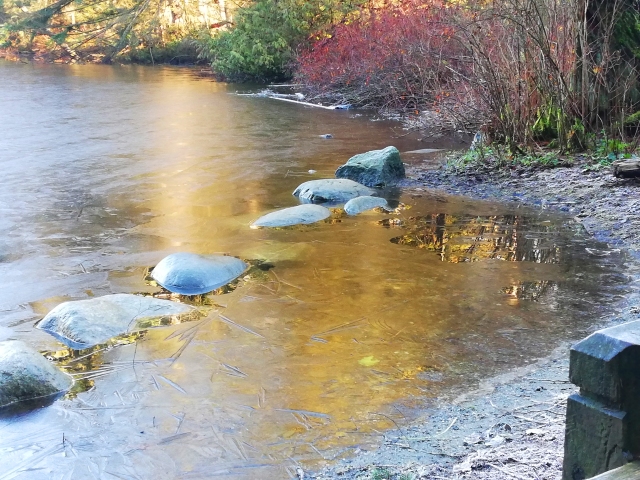 I’ve been trying to puzzle out why I haven’t been able to write much in the past year or two.

What is the cause of my writer’s block?

There are all kinds of uncertainty involved. I have nothing new or worthy to say. My writing isn’t good enough. I don’t want to reveal things that are personal. My ideas are so conflicted and confused that I won’t be able to write clearly.

Too many of my ideas are about the physical, mental, and social aspects of getting older—old? People won’t want to read about that!

Lately I have found myself more compelled than ever to take photos. Photos are a way of capturing the moment. It’s easier and quicker to take a photo than to write a story or a description.

Maybe my compulsion to take photos comes from an older person’s realization that time is slipping by too fast. I might do a certain run or bike ride that is hard and think, “This might be the last time I can ever ride up this hill,” or “I never want to run the Buntzen Lake Loop again—it’s so hard on my knee, I suck at running on this rough stuff, I don’t enjoy it!” (Then I was shocked to read a Canadian Running magazine article that rated the Buntzen Lake Loop as an “easy” trail run.)

Photos are my way of capturing a moment that is significant to me. And often, the significance of the moment is simply that it’s beautiful. I’m often pierced by the beauty of a scene. I use the word “pierced” because the sensation can be so intense—it hurts—it’s bittersweet because I know time can’t be stopped. My “click!” with my camera is my futile attempt to capture what I see and feel.

My partner Keith, who is a professional photographer, says I have a “good eye.” As a photographer, that is all I have. I have little interest in becoming a better photographer. I don’t have an expensive camera; I have no technical expertise, either in taking photos or editing them. Keith could teach me these things, but writing and editing are the crafts I strive to perfect, not photography. 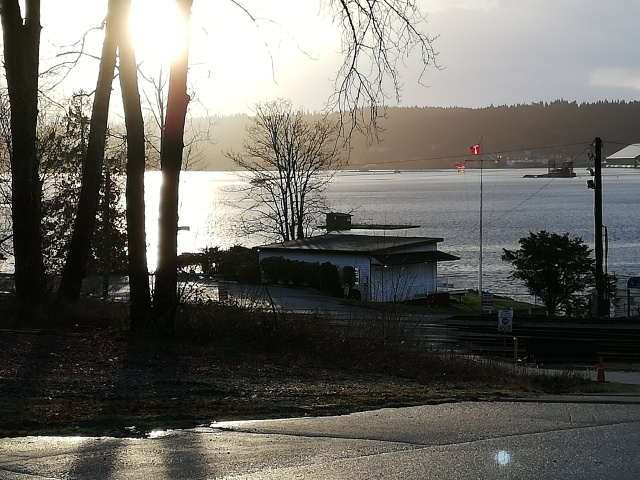 Yesterday I read a blog post that reassured me somewhat about my writing. This blog, Hoarded Ordinaries, is one I discovered by accident. I read it often because its author, Lorianne, is a “kindred spirit.” In an entry entitled “Shelved,” she writes that it’s time for her to put the ten journal notebooks piled up in her closet into their correct chronological place on her shelves. Like me, she is driven to write in her journals every day. She says that she teaches (she’s an English professor) because she can’t imagine doing another profession. She also writes in her journals and blogs every day, and has come to realize that getting satisfaction from her writing is sufficient justification for doing it.

Like Lorianne, I don’t tire of doing the same activities or taking almost endless photos of the same places. I love my environment—the mountain/Inlet view from my apartment, all the natural places where I run and cycle regularly, and Vancouver’s seasonal changes. Sure, I would love the adventure of travelling and the chance to take photos of new places. Like any Vancouverite, I could appreciate a hot sunny holiday about now. But since I can’t afford to travel much, it’s good that I am truly content where I am. 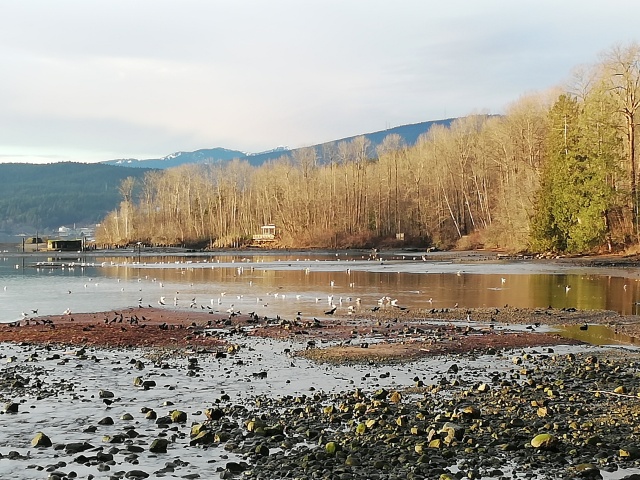 I love all three of these activities because they are rhythmical, they immerse me in the natural world, and I feel a sense of adventure and freedom whenever I’m doing them.

Yet I often feel torn between my desire to be completely engaged in the action and my paradoxical compulsion to stop and capture the moment. Part of my conflict results from decades of pushing myself all-out in my running workouts. Focus on running fast was always paramount. Stopping for photos was unthinkable. The only permissible stops were those built into the workout, like rest periods during a track workout. And because I was a distance runner, those rest periods were most often short, usually between thirty seconds and two minutes.

Even now, when enjoying my workouts is more important to me than performance (which is laughable anyway), I like to make a good effort when I’m running or cycling. I still refuse to carry anything more than a car key when I’m running. Cycling is where I feel the conflict between pushing hard and stopping for photos the most, especially if I have a limited amount of time for my ride. Stopping for photos means sacrificing the intensity of my workout. And I still consider stopping on a long uphill wimpy—even if I’m using granny gears and barely going faster than walking speed.

Increasingly, though, I am making the choice to stop. On a recent ride, when time was short, I stopped to take the photo above. And sure, it’s a pretty photo, but I wasn’t satisfied. The elusive perfect photo, where the early sunlight was especially striking and could not be captured later, would have been taken from a different place where habit had refused to let me stop. I think it was that ride that made me decide:

Yes, I will stop more often. I will at least try to capture what I see. I’m blocked in my writing: maybe I can have a photo journal for now instead, and try to publish at least one photo a day.

Walking is different—then I give myself permission to look at things closely. Even so, I love the rhythmic nature of walking, which can lead to a wonderful, relaxing meditative state that is broken if I stop frequently to take photos.

That meditative state is not only comforting and relaxing, but also leads to clear thinking, where my priorities become obvious. This happened to me yesterday.

I was walking in Mundy Park in the hour just before sunset. There were only a few people (and even fewer dogs) in the park. It was so peaceful, and so easy to stride along those beautiful trails. 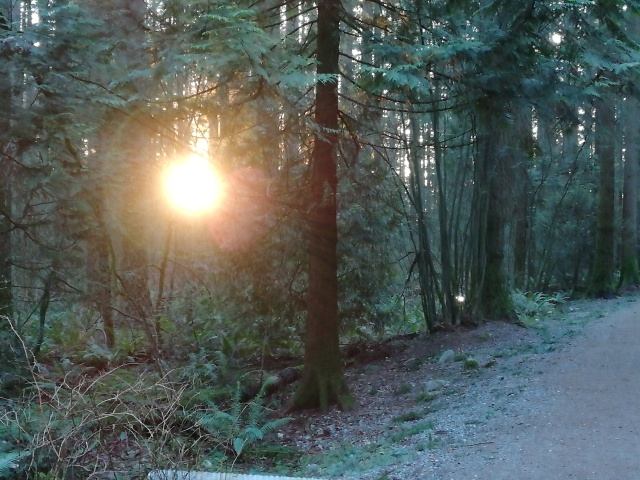 The thought suddenly came to me, decisively, that I don’t want to run in Mundy Park on Saturday mornings anymore. This is not a new thought. For almost twenty years now, Mundy Park has had off-leash hours from dawn until 10:00 a.m. Every year, the number of dogs on the trails has been increasing, but my fellow runners in the Phoenix Running Club have insisted on meeting at 8:30 a.m. as we have for almost thirty years.

Now the situation is so bad that Mundy Park has become a dangerous, conflict-laden obstacle course on weekend mornings. In June I was tripped by a dog and felt flat on my face. I almost lost my front teeth and considered myself lucky to escape with multiple cuts on my mouth, swollen lips, gravel embedded in my gums, and minor scrapes.

So far I have been unable to persuade our group to start training after 10:00 a.m. But now I have reached a decision that makes sense for my own safety, peace, and enjoyment of running. Maybe some of the club members will follow my example; maybe new people will be encouraged to join me. My walk in the park yesterday made it clear that sometimes old routines have to change.

I used to be known as a competitive runner, but now I have a new life as a professional writer and editor. I'm even more obsessive about reading, writing, and editing than I was about running. Running has had a huge influence on my life, though, and runner's high does fuel creativity. Maybe that's why this blog evolved into being 95% about running, but through blogging I'm also learning about writing and online communication. I'm fascinated by how the Internet has changed work, learning, and relationships. I love to connect in new and random ways!
View all posts by nancytinarirunswrites →
This entry was posted in Personal stories, Vignettes, Writing and tagged Burrard Inlet, Hoarded Ordinaries, Ioco townsite, Mundy Park, photography, Sasamat Lake, writer's block. Bookmark the permalink.

6 Responses to Finding my way out of writer’s block with photography: a photo journal