Posted on February 8, 2012 by nancytinarirunswrites 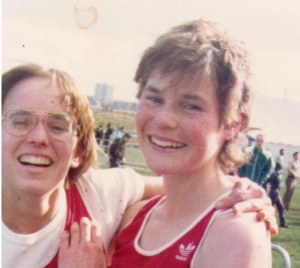 Me and Alison Wiley right after IAAF Cross-Country in Gateshead, England, 1983

Congratulations to Ron Bowker, the only person to answer both questions about this photo from my last post. He held back for a day and a half to give others a chance, but there were no takers!

This race in Gateshead was, without a doubt, the most spectacular performance of Alison Wiley’s running career. We all knew she was super talented, but she was only 20 years old and this was her first appearance in the World Cross-Country Championships. Alison ran the gutsiest race imaginable, sprinting to the front right from the gun. Racing seemingly without fear amongst the best endurance athletes in the world, she was rewarded with a silver medal, finishing only eight seconds behind the legendary Grete Waitz!

The Canadian women at Gateshead IAAF cross-country in 1983

Wiley’s race was astonishing, but behind her the rest of this Canadian team ran solidly excellent performances. For all of us, our bronze medal team placing was the chocolate icing on the cake after the excitement of Wiley’s finish. This was the only time Canadian women have  medalled as a team at the World Cross-Country. Our four scorers placed 2nd, 12th, 16th and 23rd. (Canada’s junior men’s team placed second in 1978, with other individual medal performances and top team performances over the years.)

So, here is another quiz, and I’ll have to ask Ron to hold back for a day again…

1. Identify all the people in the photo.

2. Who were the four scorers, and what were their places?

Watch for my next post—I’ll be giving you a summary about the great Canadian female cross-country runners of the 1980s—then and now!

I used to be known as a competitive runner, but now I have a new life as a professional writer and editor. I'm even more obsessive about reading, writing, and editing than I was about running. Running has had a huge influence on my life, though, and runner's high does fuel creativity. Maybe that's why this blog evolved into being 95% about running, but through blogging I'm also learning about writing and online communication. I'm fascinated by how the Internet has changed work, learning, and relationships. I love to connect in new and random ways!
View all posts by nancytinarirunswrites →
This entry was posted in Olympic Training Log, Running and tagged Alison Wiley, Canadian cross-country teams, Gateshead, Grete Waitz, IAAF cross-country championships. Bookmark the permalink.

2 Responses to Canadian cross-country running in the ’80s: Part II