Anaïs Nin describes her LSD trip, natural highs, and the transformative role of the artist

Posted on October 7, 2015 by nancytinarirunswrites

Recently I finished rereading the fifth volume of The Diary of Anaïs Nin.  I had picked it  off my bookshelf months ago when I had nothing new to read; perhaps I chose that volume wondering what Nin was experiencing at that time of her life, when she was between 44 and 52 years old.

All of Nin’s writing is fascinating, particularly to all kinds of creative people, and to anyone interested in psychology and the subconscious mind. Nin wrote prolifically, but though she published novels, poetry, essays, and erotica, both she and her critics consider her Diaries (written from the time she was 11 until shortly before her death at age 73) to be her most important work.

Last week I was blown away by the very end of Volume Five. In seven pages*, Nin describes and analyzes her supervised LSD trip. It’s the clearest, most insightful explanation I’ve ever read of how a drug-induced “high”— its perceptions, its sensations, its moods and thoughts—compares with a “natural” high.

Nin first describes all the visions and sensations she had while under the influence of LSD. She experienced intense visual beauty and beauty of other senses, too, where there was  a breakdown of the borders between the senses, a synesthesia. She also experienced insight into the “meaning of life,” another recurring feature of drug trips.

However, most drug users can’t remember their profound insights—at least they can’t put them into words. Nin, though, being both a talented writer and a lifelong student of the subconscious mind, is able to communicate her visions and thoughts from her LSD trip. In fact, her writing about it makes the drug seem incredibly seductive.

Here is an example of her synesthetic experience:

The music vibrated through my body as if I were one of the instruments and I felt myself becoming a full percussion orchestra, becoming green, blue, orange.

The walls turned to gold, the bedcover was gold, my whole body was becoming GOLD, liquid gold, scintillating, warm gold. I WAS GOLD. It was the most pleasurable sensation I had ever known, like an orgasm. It was the secret of life, the alchemist’s secret of life.

What she is able to do after her drug trip goes far beyond most people’s ability, I suspect. She sees that her fantastical visions and thoughts were not new: she can trace them all to her memories, and find their subjects and symbolism in her writing. All the drug was doing, she explains, was breaking down the normal resistance to entering those worlds of dreams and fantasies, the whole world of the subconscious which contains all experiences and memories right back to early childhood or even earlier. For example, she remembers often having the sensation of “becoming gold” while sunbathing.

Nin sees the artist as someone who can naturally access the realm of the subconscious, without resorting to drugs. The artist trains his senses to be highly receptive to the beautiful, the wondrous, the glimpses of another world and another level of consciousness.

This is something I have read about before, and at times I have experienced these mystical transports to a different kind of consciousness myself (without drugs).

The new idea that Nin gave me here was about the significance of the artist. The artist, through hard work, can share what the dreams and visions of the subconscious reveal to him. I never before made this leap of understanding of what happens through art—that the artist’s creative act builds upon his visions and shares them. They aren’t lost, the way drug-induced visions are transitory.

Here is Nin’s beautiful description of the artist at work:

The one who wrestles his images from experience, from his smoky dreams, to create, is able then to build what he has seen and hungered for. It does not vanish with the effects of the chemical.

What has happened that people lose contact with such images, visions, sensations, and have to resort to drugs which ultimately harm them?

She blames modern culture (this was written in 1955) and what she calls “la condition humaine … with everything forcing you to live in the prosaic, the shabby, the practical, the quotidian, the down-to-earth…”

She writes further to mourn the impoverishment of life without art:

It was the banishment of art which brought on a culture devoid of sensual perception, of the participation in the senses, so that experience did not cause the “highs,” the exaltations, the ecstasies they caused in me.

The last two sentences of this volume of The Diary encapsulate Nin’s plea to choose the integration of art into real life rather than the false escape of drugs.

What can be more wonderful than the carrying out of our fantasies, the courage to enact them, embody them, live them out instead of depending on the dissolving, dissipating, vanishing quality of the drug dreams.

I will not be just a tourist in the world of images, just watching images passing by which I cannot live in, make love to, possess as permanent sources of joy and ecstasy.

What a thundering conclusion!

I wonder what Nin would make of our modern world, 60 years after she wrote the words I’ve quoted above.

It is a time when our technology gives us remarkable tools both for being creative and for sharing our creative work.

But have more of us escaped the limitations of la condition humaine that Nin deplored? Many people, certainly, have used technology’s new tools to explore and enhance their creativity. Works of art can be shared (at least virtually) by anyone, to the whole world. Self-publishing is a possibility for almost everyone. (Nin was self-publishing in the 1940s, when it was called the “vanity press”—she fought for decades to have her work understood, published and recognized.)

But technology alone cannot produce creative insights or work. Writing, painting, making music—what is essential for the act of creation? What about the time required to read, to look deeply at the work of others to absorb what the greatest minds have already seen, what can be assimilated into one’s own personal thoughts and experiences? What about the solitude, the quietness, the extended reflection that the artist may require to access the subconscious, the source of inspiration? What about the deep concentration and hours of careful work necessary to communicate the vision, to produce a valuable work of art?

Our society’s frenetic pace and relentless interconnectedness provide constant distractions. It is certain that many people continue to choose the “easy” escapes of drugs and alcohol. The artist must consciously create his own space of solitude.

My high at Sasamat Lake 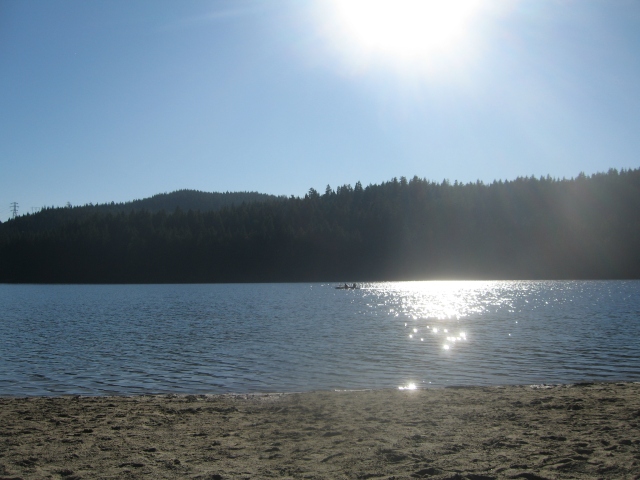 The same day I finished Volume Five of The Diary and made some notes for this post, I had my own experience of altered consciousness, a time of utter harmony and “Oneness” (as Buddhists might say) with my universe. I was at Sasamat Lake on a perfect, tranquil weekday afternoon. The air in the trails was crisp, but on the beach it was Indian summer.

I remember that moment of looking out over the water and seeing the shiny part near the opposite shore where the sun was bright on the water. And a large canoe, containing many paddlers, went through this shiny place and the boat and its inhabitants were sharply silhouetted against the silver.

My attention was riveted on that iconic boat; yet at the same time I was seeing the WHOLE vision in front of me, and that vision also contained all of my other senses. The picture in front of my eyes was a freeze-frame whose piercing beauty captured my sense of that moment’s perfection. It was everything that I felt and knew in that moment. It included my whole life; it contained all my physical experiences of that day that had led to this moment of perfect spirit/body harmony.

All of this was contained in that all-bright silver band on the water; the focal point.

All quotes in this post were taken from pp. 256–262 of the following edition of Anaïs Nin’s Diary:

I used to be known as a competitive runner, but now I have a new life as a professional writer and editor. I'm even more obsessive about reading, writing, and editing than I was about running. Running has had a huge influence on my life, though, and runner's high does fuel creativity. Maybe that's why this blog evolved into being 95% about running, but through blogging I'm also learning about writing and online communication. I'm fascinated by how the Internet has changed work, learning, and relationships. I love to connect in new and random ways!
View all posts by nancytinarirunswrites →
This entry was posted in Book Reviews, Commentary, Writing and tagged altered consciousness, Anais Nin, artist and modern technology, artist and solitude, creativity, drugs highs and natural highs, LSD, Sasamat Lake, synesthesia and drugs, The Diary of Anais Nin, the transformative role of the artist. Bookmark the permalink.

1 Response to Anaïs Nin describes her LSD trip, natural highs, and the transformative role of the artist